Doctor mm board-certified laser dermatologist today’s topic will be a really basic one it’s basically 101 of laser hair removal so we’re starting from basics and I’ll tell you all you need to know and more in regards to laser hair removal. 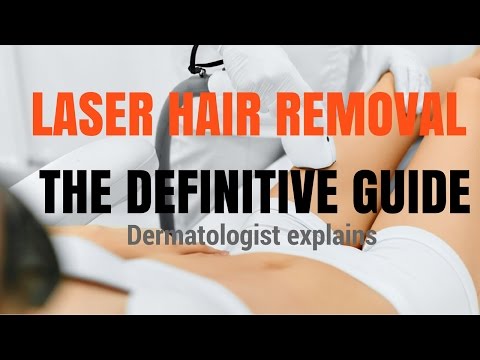 So the first thing is that if your hair is white it is not suitable for laser hair removal there isn’t being is that we need a chromophore or a target to hit. so laser hair removal only works if you have dark hair. Fact number two: a laser is different from IPL.  Now the industry in Australia and I guess in the u.s. many countries and they’re not regulated because if you these salons are doing things and medical specialists are doing things so it’s out there and everyone does things.

So if you see something called this which is an IPL don’t go near it because this is not gold standard treatment. Yes did we used to do this for laser hair wall or hair removal, yes we did this but this is a decade old technology. Does it work? yes it does but with the newer systems IPL is far far outdated. So if anyone’s trying to convince you to do IPL for hair removal walk away because there are much more effective systems.

So we can go through those systems very shortly, so how does laser hair removal work, in order to understand this we have to know the hair cycles 90% of the time hair in the anagen state and is the antigen state in other words a growing phase which we can actually remove the hair.

There are other systems out there for example the luminous uses an 810 diode and it’s basically sucks the skin up and that delivers a pulse which is basically painless. so remember with laser hair removal no matter what wavelength were setting we’re actually aiming not to actually hit the heavy itself but to actually hit the area of the Bulge or the root of the hair itself.

So that is the basis so which lasers have the least pain in regards to hair removal. okay now we can talk about cooling systems now the cooling system is really important for two things number one patient comfort and number two protection of the upper part of your skin or your epidermis .

So remember we do not want to blister the patient we do not want to treat the upper part of the skin we want to preserve that but we want a to deliver all that energy to where the hair bulb is so they’re different cooling systems if we look back to our old fashion oops nearly tripped over their old fashion systems like our IPL.

The cooling system uses a sapphire crystal so this sapphire crystal we still use in the modern cooling systems, so it still pertains to lasers another way of cooling system or or basically to decrease pain is to use what’s known as a gated theory and the gated theory is basically suctioning of the skin and luminous makes a really good lay circle the light shear that’s probably my favorite laser is an 810 diode and it works by actually sucking the skin and realistically this treatment is is painless.

So watch me having the close it done right you do it,  so we’re doing I’m here removal now. Okay so what do I feel then really it’s probably one out let’s keep going all the way down my upper burnt head everywhere I should be I should be shade sir but that’s fine.