Laser hair removal works by the process of selective targeting of a specific area of the body and using a specific wavelength to absorb light into that area. It does not work on a hair by hair basis, instead it focuses a wide beam of light that treats many hairs at one time.

The wavelength of light absorbed has to be sufficient enough to damage the targeted tissue area while leaving the surrounding area basically untouched. The principle behind this process is called selective photothermolysis.

Lasers are intense beams of monochromatic and coherent light. These light beams are produced by laser devices that contain either minerals or gases. The four main types of lasers are solid state, semiconductor, gas and dye. 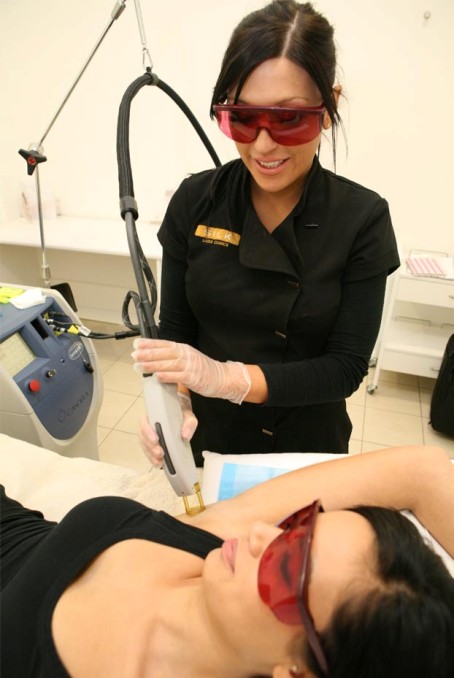 Most people believe that laser hair removal works best on hair that is in its anagen phase. This means that the hair is actively growing and is attached to the dermal papilla. The theory behind this belief is that if the dark pigment in the hair shaft extends all the way down to the dermal papilla, it will be destroyed and vaporized by the coherent light beam that is focused upon the area. This happens because the light beam will follow the dark pigment all the way down to the derma papilla.

Visible light has wavelengths that range from 390 to 770 nm, or nanometers. Lasers operating in this range allows for successful laser hair removal without causing any damage to the dermal tissue. Lasers with a light source that operates between 700 to 1000 nm targets melanin in the hair shaft effectively.

For example, the wavelength of an alexandrite laser is 755 nm, which is red in the visible range of the electromagnetic spectrum, making its target melanin. The stronger, or greater, the wavelength, the deeper it penetrates target selectively absorbing the wavelength.